Not a soul would have believed me, so I kept quiet

“It seems to me that respect for the ‘other’ is the indispensable foundation for a life worth living.
Education, to raise awareness of the ‘other’, their values and differences, can transform lives.
Its role is crucial. It is the humanist challenge I undertake.”

Not a soul would have believed me, so I kept quiet. By Sam Braun

“The production is built upon the power of the testimony we are dealing with. Archival video footage is uniquely woven around the solitary presence of one actor and is interspersed with waves of music from the violin or accordion. The music is like tears from the depths of one’s soul, and through culture and beauty we leave behind the ravages of human barbarity. On an empty stage, a rock, a tombstone, a candle, images … the testimony of a man who reminds us that once one strikes at the dignity of one person, one is violating all of humanity, our humanity.”

Since 1981 Patrick has taken part in more than forty theatrical productions, mostly in a leading role. He was Patrick Morel (one of the principal roles) in the film Brigade Mondaine. He has recorded radio plays for France Culture (Jacques Taroni, Alain Trutat and others). He created and managed, with Odile Michel, a 200-seat theatre in Avignon (La Fabrik Théâtre, formerly L’Atelier du Graal). He directed, Lila L’Algérienne (Lila the Algerian woman), a short film based on the story of Louisette Ighilahriz, together with several other features with Odile Michel, including Paroles d’Artistes – Sarajevo 1994 (In the words of the artists – Sarajevo 1994) and Itinéraire de Vaclav Havel – Prague 1989 (The Journey of Vaclav Havel – Prague 1989).

At the Festival of Avignon he produced (from its conception to direction) Hommage à Jean Vilar (Tribute to Jean Vilar) together with Agnès Varda, Nicole Croisille, Judith Magre, Claude Confortès, Jean-Pierre Jorris, Jeanne Moreau, and others. He currently teaches dramatic arts and plays in François Rabelais’s unique cabaret show from The pact for proper use of wine, with Odile Michel and Cyril Giroux. 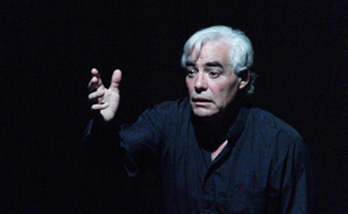